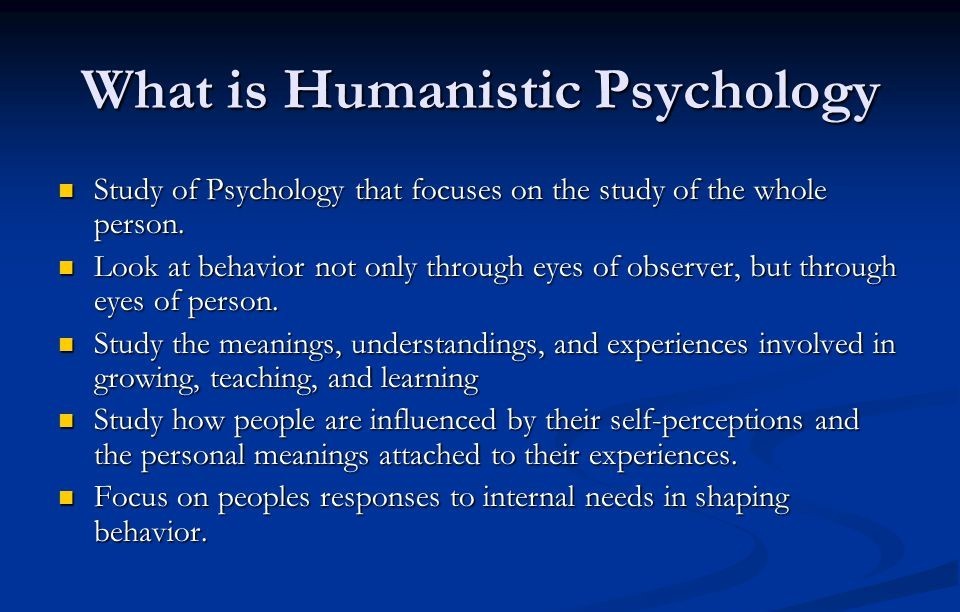 Humanistic psychology, a movement in psychology supporting the belief that humans, as individuals, are unique beings and should be recognized and treated as such by psychologists and psychiatrists. The movement grew in opposition to the two mainstream 20th-century trends in psychology, behaviorism and psychoanalysis. Humanistic principles attained application during the “human potential” movement, which became popular in the United States during the 1960s.

Humanistic psychologists believe that behaviorists are over concerned with the scientific study and analysis of the actions of people as organisms (to the neglect of basic aspects of people as feeling, thinking individuals) and that too much effort is spent in laboratory research—a practice that quantifies and reduces human behavior to its elements. Humanists also take issue with the deterministic orientation of psychoanalysis, which postulates that one’s early experiences and drives determine one’s behavior. The humanist is concerned with the fullest growth of the individual in the areas of love, fulfillment, self-worth, and autonomy.

The American psycholo Abraham H. Maslow, considered one of the leading architects of humanistic psychology, proposed a hierarchy of needs or drives in order of decreasing priority or potency but increasing sophistication: physiological needs, safety, belongingness and love, esteem, and self-actualization. Only when the more primitive needs are met can the individual progress to higher levels in the hierarchy. People reaching self-actualization will have fully realized their potential.

The concept of the self is a central focal point for most humanistic psychologists. In the “personal construct” theory of American psychologist George Kelly and the “self-centred” theory of American psychotherapist Carl Rogers, individuals are said to perceive the world according to their own experiences. This perception affects their personality and leads them to direct their behavior to satisfy the needs of the total self. Rogers stressed that, in the development of an individual’s personality, the person strives for “self-actualization (to become oneself), self-maintenance (to keep on being oneself), and self-enhancement (to transcend the status quo).”

Following the writings of Jean-Paul Sartre and other existential philosophers, many humanistic psychologists adopted the existential view of the importance of being and the meaning of life. The various “modes” of being-in-the-world were described by Swiss psychiatrist and early leader of existential psychology Ludwig Binswanger. According to Binswanger, the single mode is the individual who chooses to live within himself, the loner. The dual mode occurs when two people unite in feeling for each other. Thus, “You” and “I” become “We.” The plural mode occurs when an individual interacts with others. Finally, the mode of anonymity occurs when an individual loses himself in a crowd or disassociates his feelings from others. American existential psychologist Rollo May emphasized humans as beings who do the experiencing and to whom the experiences happen. To May, the awareness of one’s own mortality makes vitality and passion possible.

Gestalt therapy—which bears little resemblance to the experimental school of Gestalt psychology of the early 20th century—represents another humanistic approach. It has emphasized a positive view of human beings and their potential to achieve real joy. Another influential therapy of the human potential movement is the technique known as transactional analysis, developed by Eric Berne. Its goal is to build a strong state of maturity by learning to recognize the “child” and “parent” aspects of personality in oneself and others.

These are about the personal nature of the human experience. Love, creativity, meaning and understanding of the individual human being are all central to this vital and popular form of counseling. Humanistic psychology is often called the “Third Way”; not about the scientific side of behavior or about examining our past, but about understanding the fullness of our rich human experience.

This online course with Chrysalis Courses Online in humanistic counseling will enable you to gain a comprehensive understanding of humanistic counseling with the support and guidance of an expert counselor and tutor. You’ll learn about the history of this popular method, notable therapists and theories, together with a practical understanding of how to apply the skills in daily life.

If you’re an existing Therapist, you can use this course to add Humanistic Counseling to your therapeutic toolkit or for professional development.

This course is recognized and Quality Checked by the National Counseling Society which holds an Accredited Register, recognized by the Professional Standards Authority.

So whether you a professional therapist or just looking to get you toes wet, this would be a great course for you. If you haven’t done any before I would recommend starting with either the NLP or Counseling courses, both are again accredited and can be added to you resume just as importantly as it is added to you life experience and values.

So if you want to give this one a go, HERE is the link to sign up with Chrysalis Courses Online.

Welcome to The Own Yourself

Please log in again. The login page will open in a new tab. After logging in you can close it and return to this page.